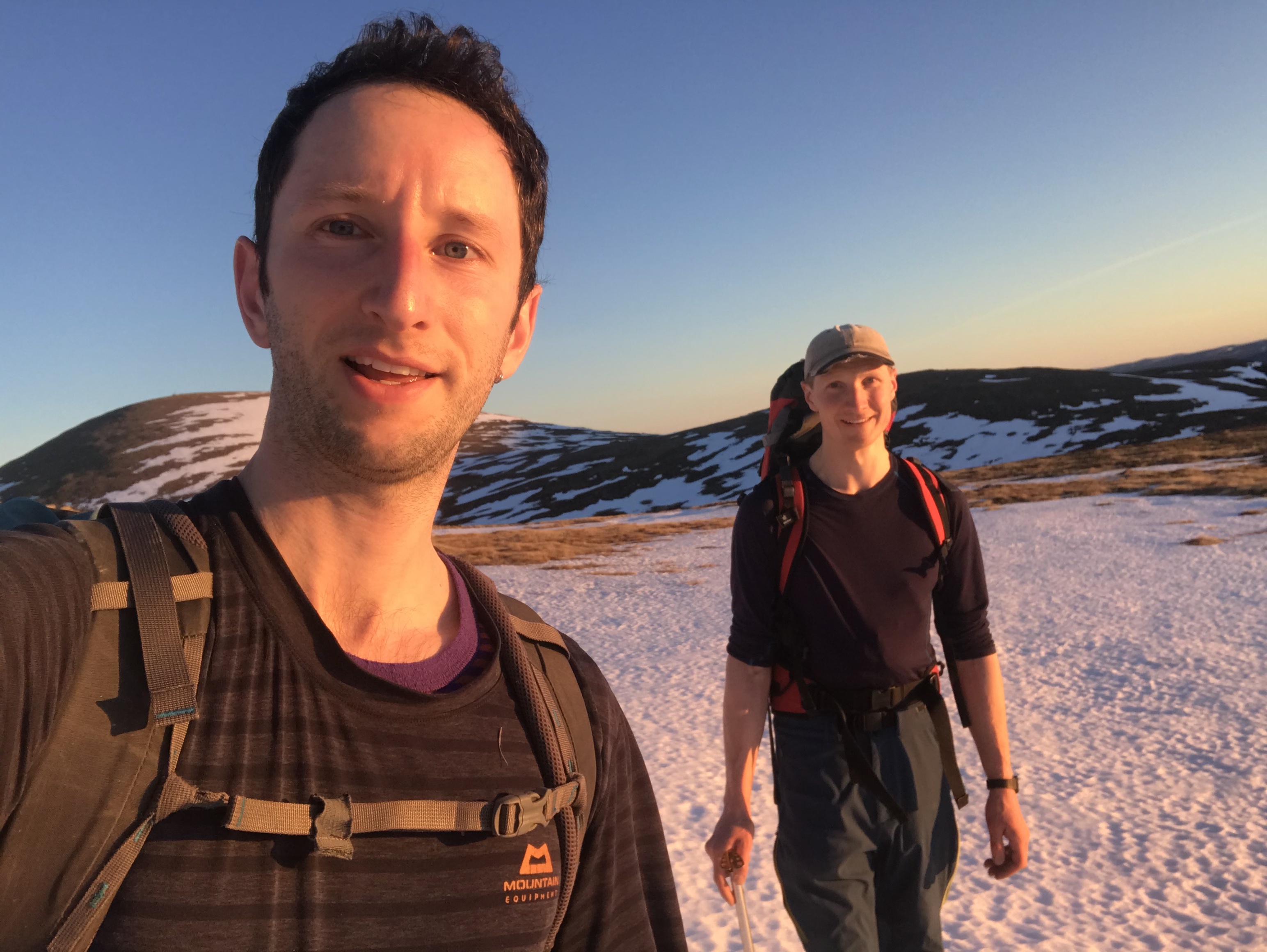 I’m in Scotland for a few weeks. Murdoch was free at the weekend and noting the exceptional forecast we felt duty bound to max a day out. Our past Christmas outings have tended to be ‘fun’. No ledge shuffling or late finishes. So something good, but civilised.

1042 hPa is pretty high pressure (the highest recorded in Scotland is 1053 hPa). The settled air was going to flip our standard altitude-temperature gradient so it would be warmer higher. Unlike at sea level, where the humidity has been high and everything wet, the humidity high up was to be really low. Maybe rock climbing then.

One of the features of low humidity in the winter is that the realised temperature for snow becomes considerably lower. This is because a low humidity air mass has plenty of room for stuff to move into, promoting evaporative and radiative cooling of objects with energy to burn (eg, at 4 deg C and 50% humidity, the realised or ‘wet bulb’ temp is 0 deg C). So even if its warm in the air the snow loses heat and can remain frozen. So the balance to strike for us was between a light weight rock climbing pack and not sliding off a cliff.

I was somewhat surprised by Murdoch’s enthusiasm at my suggestion of The Needle. The Needle is a 260m E1 on the Shelterstone Crag in the heart of the Cairngorms. It would also be in the shade. But I suggested it would be dry and warm enough for us. We settled on ‘summer style’ but with plenty of warm clothes and a lightweight axe. Most importantly we had our familiarity with the terrain and a willingness to change our plan if necessary.

Fast forward to pitch 1 and a distinct air of tension! The normal start has a wet streak so I’m negotiating an alternative start via Stone Bastion which in my words “should be easy”. Another wet patch, some soul searching, care and rope trickery gets us onto The Needle proper. Hmm. I crack on up the next long slab pitch.

We arrive at the terrace a little later than anticipated. With only a 60m rope we feel the nudge of commitment. However from this point the climbing is safer and more positive. We can link some pitches and we still have plenty time in the day. Murdoch sets a strong pace up the steep wall and a few more rope lengths of cracks and wobbly blocks we’re below the Needle Crack, 60 metres from the top. The monster chimney is soaking but a crack runs parallel and protection is there when you want it. Some purposeful squirming gets me to the top with genuine relief. I reach the plateau as the moon appears on the horizon for the second time in the day. Its warm and windless. Murdoch has had to use his head torch and comments the chimney was hard. The darkness had seemingly awakened his inner masochist as he mentioned a slight pang of jealously about not getting to lead it!

We skipped back to 1141 waxing lyrically about the Cairngorms. Naturally Martin Moran’s name came up. Martin was an inspiring character who had a positive influence on our lives, me through his writing and stories and later doing some work for Moran Mountain and Murdoch as a friend, early mentor and winter climbing partner. We recalled his story of climbing Angel Face one February and agreed he’d have been entertained by our day on the Shelterstone. We also realised that by strange coincidence it had been a decade since we’d both climbed The Needle last. Me with Rory Brown as an early multi pitch extreme in August 2012 and Murdoch with Martin, as an VIII,8 winter climb on 16th December, 2011.

NB. On the 18th December it was 18 deg C warmer on Cairnwell than in Braemar. Air humidity on the summit of Aonach Mor got as low as 15%. The snow remained firm all day. 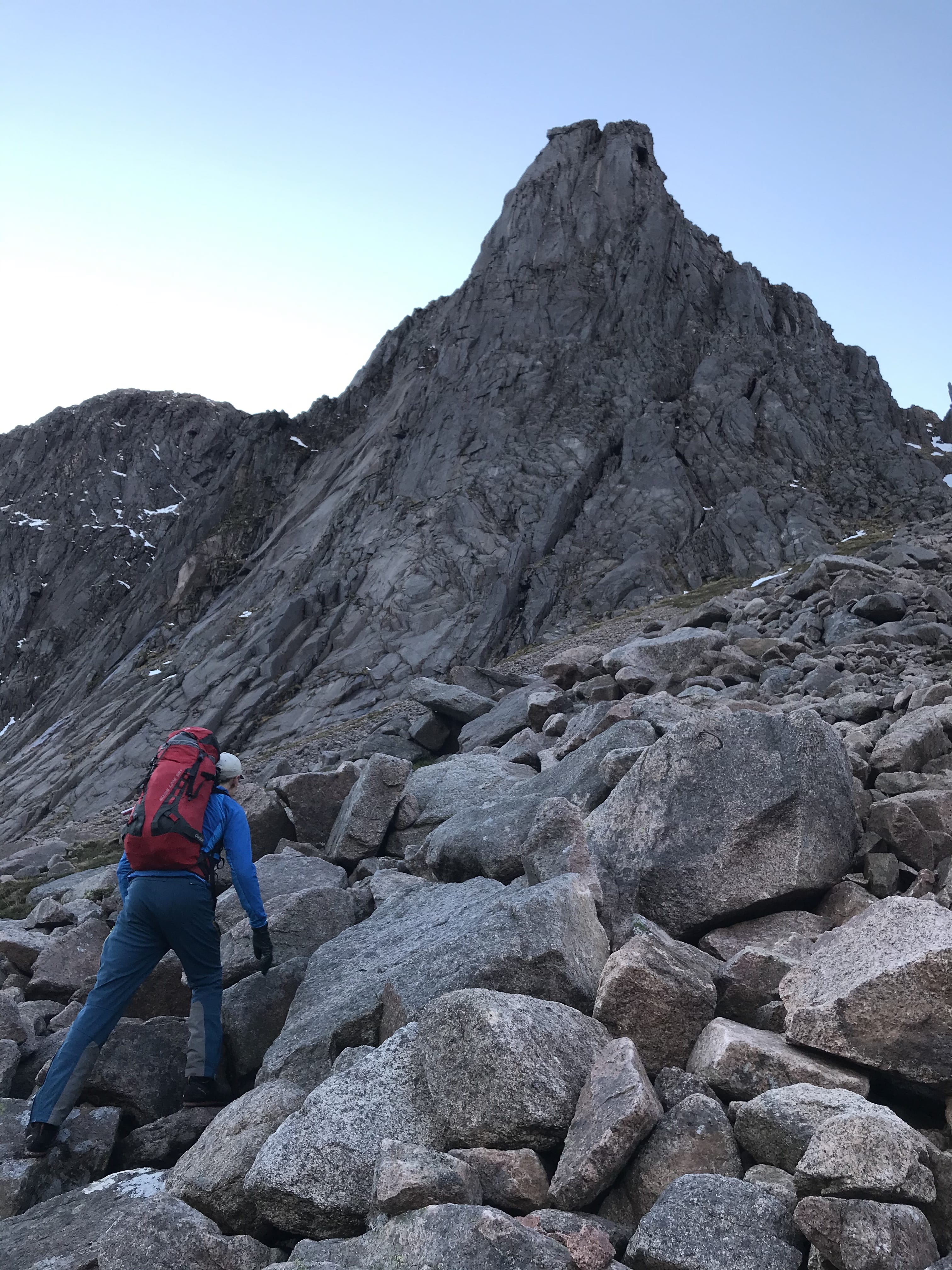 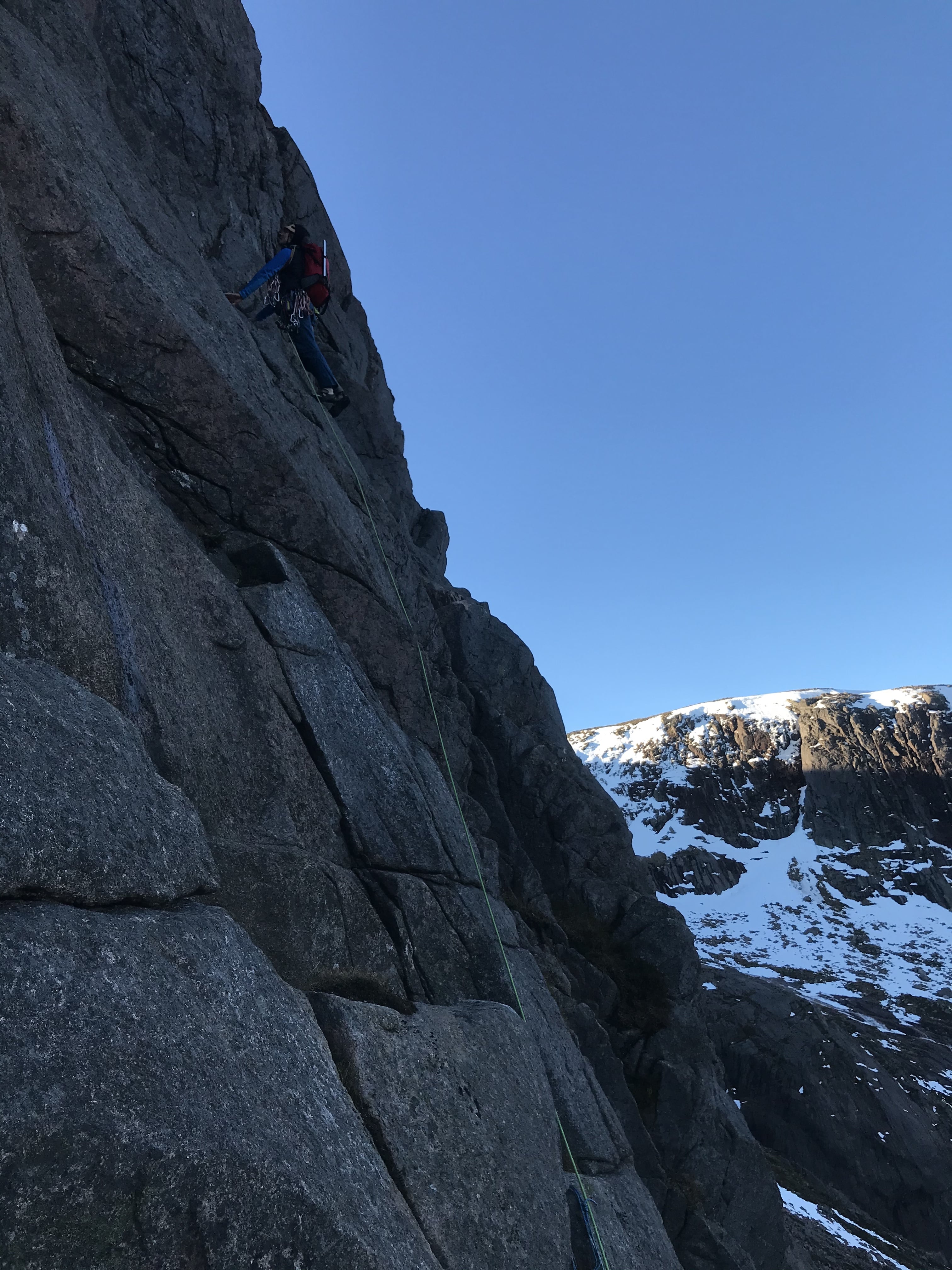 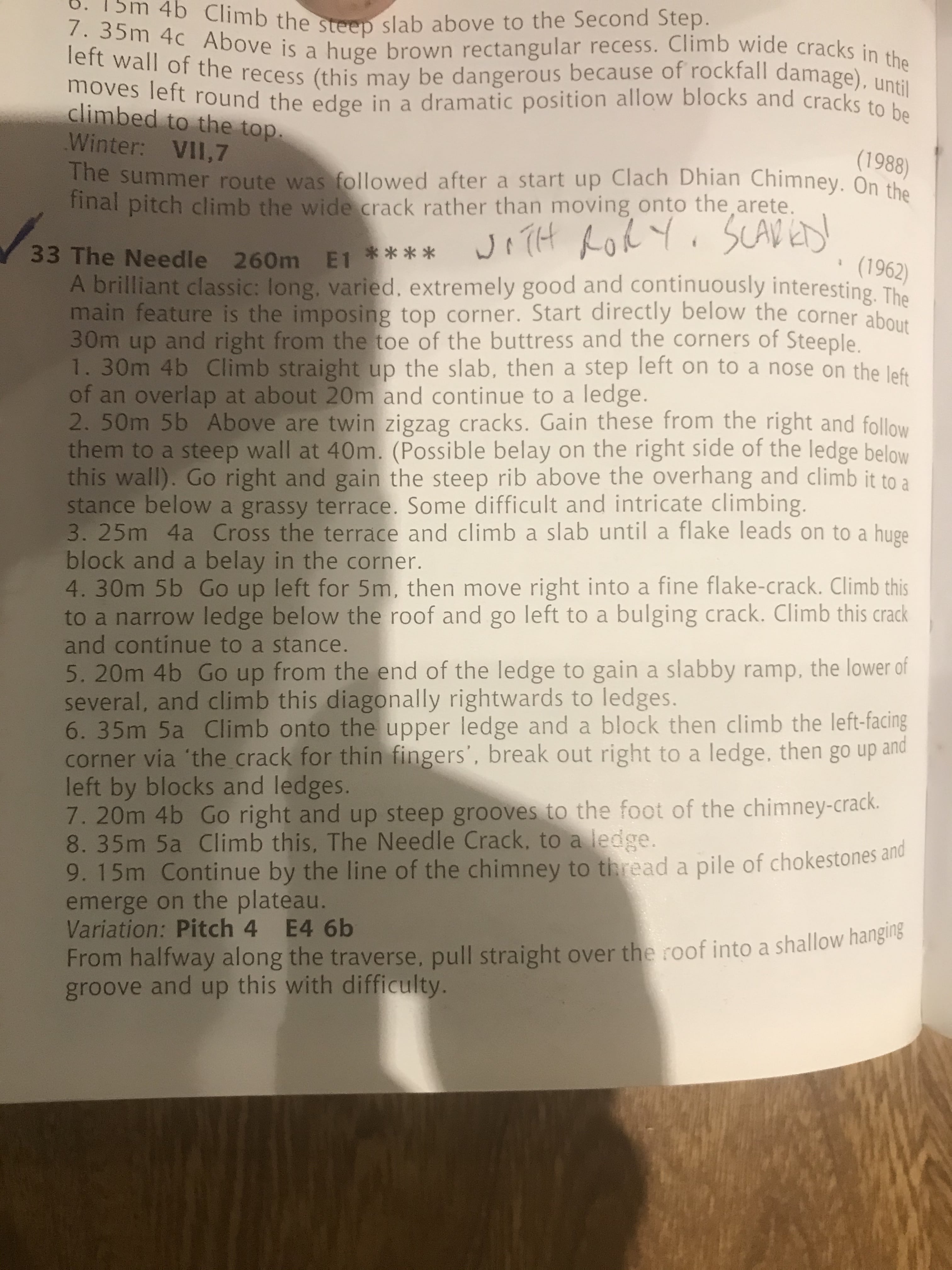 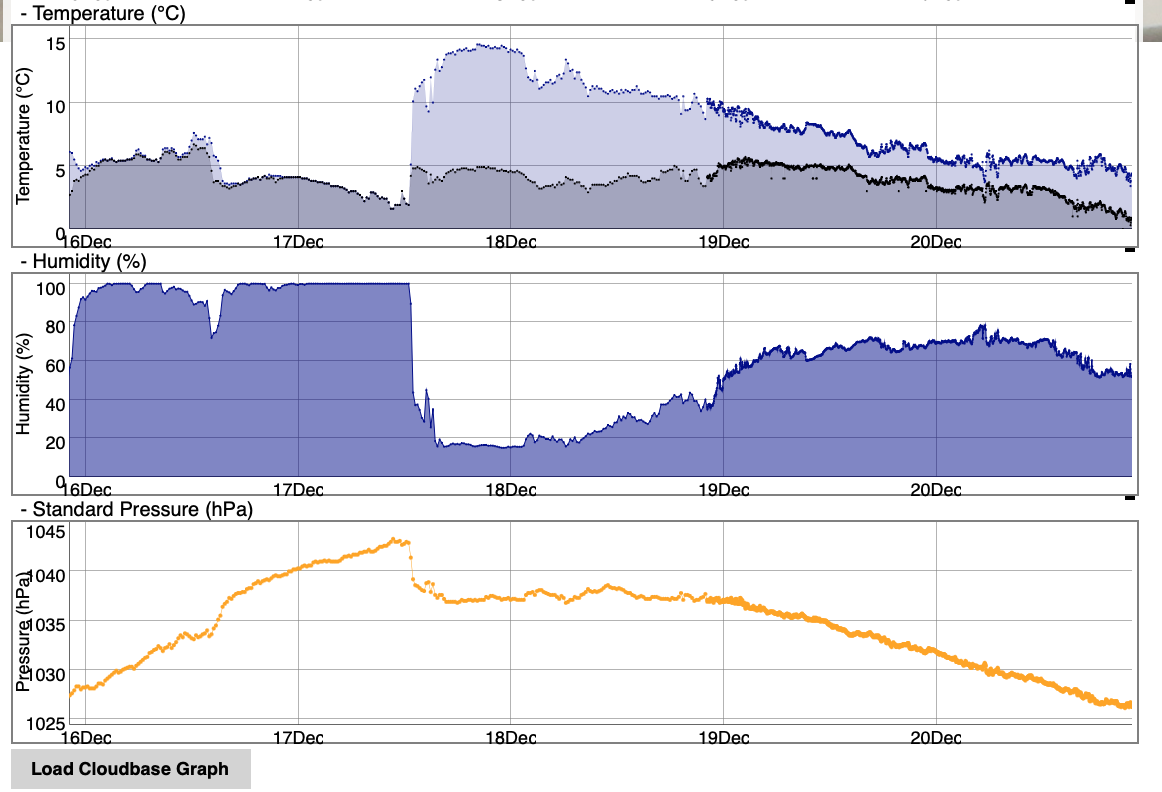